Let’s look at the use of space in a new urban house in a Tokyo suburb. This house was recently built in a town developed on a new train line, and most houses in the neighborhood exhibit variations of the floor plan below. This house obviously has less space than the farmhouse. Yet guests to this house do not have access to—nor will they be shown through—the entire house. Visitors still need to be aware of uchi / soto distinctions, so let’s see what happens when Amy visits this house for a short homestay.

Amy was introduced to this household through her study-abroad program, which arranged for her to do a three-day homestay there. The house is screened from the road by a wall and a hedge; a visitor enters the wall through a small gate. At the gate is a buzzer, which is connected to an intercom. When Amy arrived she rang the buzzer, which was answered by the okaasan inside the house. Amy was then invited in, and proceeded to the front door, where she was met by the okaasan, and admitted to the genkan, a transition space between outside and inside. 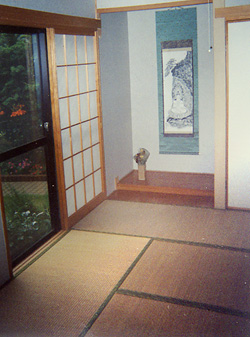 Amy was then brought into this guest room, which was her sleeping room during the homestay. The house was divided by the hallway from the genkan, which allowed Amy private entry into the guest room, and the guest room could also be closed off from the other family rooms. This room had new tatami mats, a tokonoma alcove exhibiting a piece of artwork, and no other furniture in the room, except a small table. This room opened onto the garden, giving it the best view, and the most sunlight in the house. It also had the same kind of stone pathway through the garden to a sliding door entry that the old farmhouse had. But this pathway appeared to be ornamental; and the okaasan told Amy it is rarely used for guest entry.

Guests who are “closer” (neighbors, or close relatives), or visitors on business, are invited into the (Living/Dining)LD area of the house. Although it is really a single room, this area also provides two choices for hosting guests: 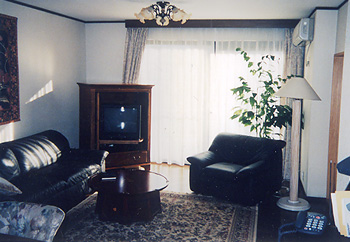 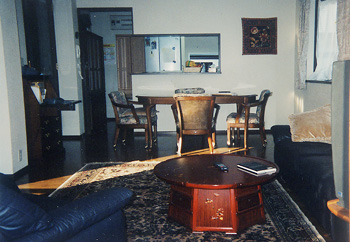 Thus guests can be invited either to the Living (L) area with its comfortable leather chair and sofa, or to the large dining table of the (D). In either area they will sit and talk while enjoying coffee, tea and snacks. The Living room is actually a guest room, used for guests who are staying for a shorter time than the guests invited into the tatami room. Guests invited to the Dining (D) area are “closest”; they may live nearby and are dropping in for a short visit. Since Amy was staying for several days she was invited to sit on the sofa in the “Living” area, and after a first-night special meal in the tatami room, she ate with the family in the D area. 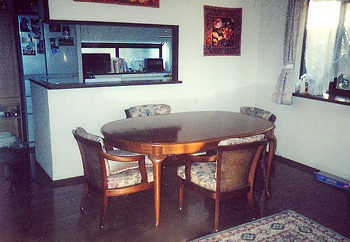 The house has two “inside” areas; the dining/kitchen area (DK), and the entire upstairs bedroom area. The least “inside” room, the kitchen, is not really separated from the dining room, and can be clearly seen into (and accessed) by guests invited to the dining room area. But the upstairs bedrooms (“inside”) are accessed solely by family members. Family members spend most of their time when together at the dining table. They can use the “L” room to watch TV but they invariably sit or lie on the floor when doing so. The leather sofa and chair in this room are solely for guests.

See Plans of Both Houses

The suburban house exhibits the latest floor plan for suburban Tokyo.Although this house has amenities such as a computerized bathtub that regulates water flow and temperature, which can be controlled from the kitchen, the use of space in the house spells out the uchi / soto distinctions explained in the BASICS (Module 5.1), and the country house (Module 5.2).

The house is divided into “outside” guest areas and “inside” spaces for family members, even though the distance axis is not laid out as neatly as the row of guest parlors in the country house. Guests are not shown through the entire house (Amy never saw the upstairs rooms). Nor do uchi members use the guest areas, such as the tatami guest room, or the living room sofa and chairs. 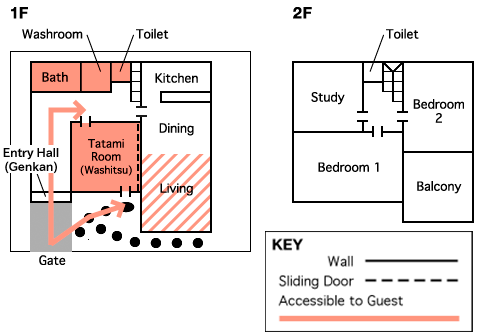 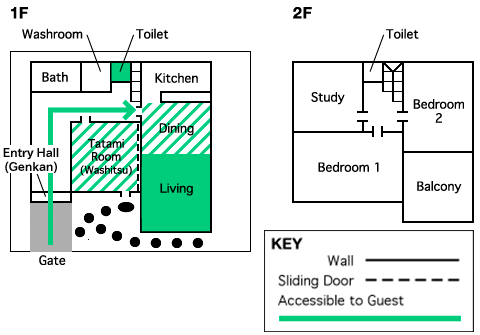 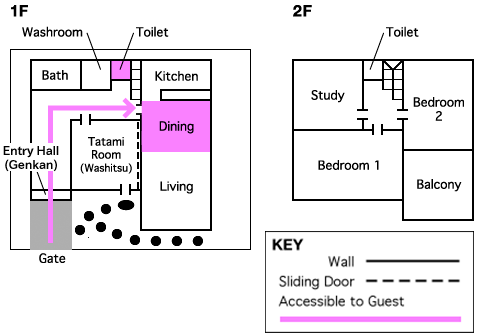 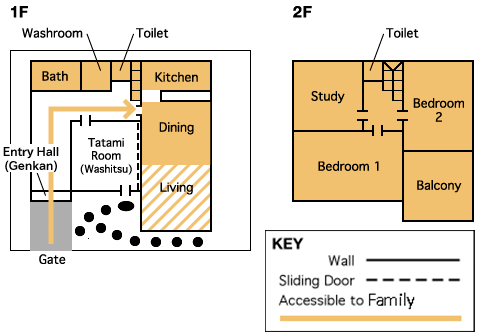