This page focuses more closely on another mode of uchi/soto communication: the use of space in the family house. Homestay guests need to be sensitive to these distinctions since, for example, Japanese hosts do not normally show guests through their entire house, and it is rude for guests to go into rooms (such as the kitchen) where they don’t have access.

Peter’s study-abroad program has a rural homestay option set up for students during the semester break. Last year, a student named Amy participated in this program, and she stayed with a family who lived in a large old farmhouse, in a mountainous area of Nagano Prefecture. Amy is an architecture student, and she was fascinated by the farmhouse, which was over 350 years old. 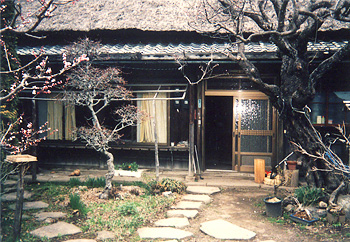 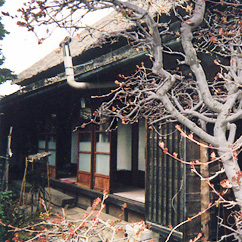 Amy’s host family let her make a design of the floorplan (See below). The guest/host usage shown in the floor plans below allow you to see: 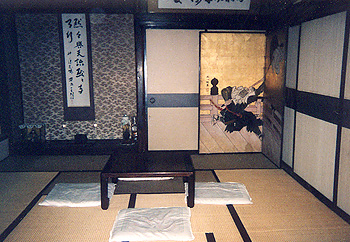 Amy’s room had new tatami mats on the floor, and a special alcove (called the tokonoma), in which the host father had hung some beautiful ink brush drawings. On the floor was a lovely ceramic bowl with a flower arrangement. This room also had a central view of the garden, because it had large sliding doors open to gardens on two sides. The room was uncluttered, with only a table and the artwork. The room was multi-purpose; Amy ate with the host family at the table, and she slept in the guestroom too. 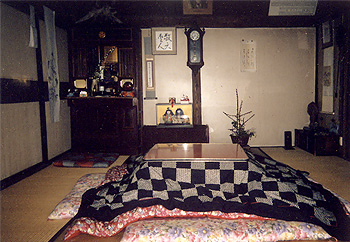 Parlor 3 is right next to Parlor 4 and sometimes holds the overflow guests from Parlor 4 (or Parlor 2). This room holds the family Buddhist altar and a table with a heating element. It has a few more more everyday items than Parlor 4. 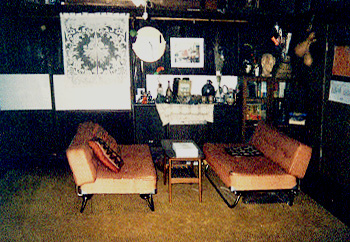 Amy’s host family has an adult unmarried son in his early twenties who is living in Tokyo. He sometimes brings his Tokyo friends to the house to go hiking in summer or skiing in winter. Take a look at “Less Distant Guests” and see which part of the house they are invited into. This room has a more lived-in look than the room Amy was in, and has only one view of the garden. It has two sofas facing one another with a table in the middle. The guests eat at the table, although they often sit on the wood floor. This room is cluttered with souvenirs family members have brought back from various travels.

The father in this house has a sister who grew up in the house with him. She is called obasan (aunt). She comes back frequently to visit, and when she does, you can see (in “Close Guests”) which part of the house she is invited into. 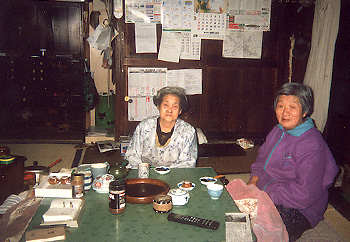 Parlor 1 has a much more “lived-in” feel than Parlor 2, and its tatami mats are the oldest and most worn of the four parlors. It is cluttered with mail, magazines, a large hot water thermos, a small teapot and teacups. Its shooji, or paper-covered sliding doors, have holes poked through the paper by the youngest children. A kotatsu (table with heater) is in the middle of the room, in which close guests are invited to sit with the family members. 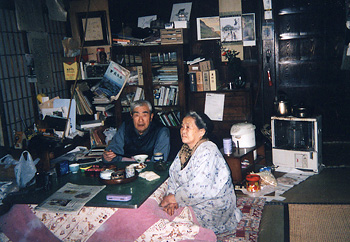 Family members sleep in the “inside” areas of the house, and work in the kitchen or the gardens and orchards of the farm. They spend most of their free time, eating, talking, or watching TV in the lived-in space of Parlor 1.

While Americans often take pride in showing their guests through the whole house, none of the guests above are shown through this Japanese family’s house. Each guest is shown into a different area of the house, and Japanese guests know the significance of being invited into one versus another of these rooms.

The house design spells out exactly the uchi / soto distinctions explained in the BASICS (Module 5.1). It is neatly divided in half, with four “inside” rooms, accessible only to uchi members; and four “outside” rooms, all of which are used as guest rooms for soto relationships. Furthermore, both uchi and soto sides of the house are organized along an axis, which specifies greater distance versus closeness in the uchi / soto relationships between family and guests.

This module shows how family members in a large country house make use of the spatial layout of their house to communicate uchi / soto relationships. But their venerable thatched-roof house has enough space to differentiate several degrees of uchi / soto distance among their guests. In the next module we’ll examine whether contemporary urban house designs can also be used by family members to differentiate these degrees of uchi / soto relationships, albeit with much less space.